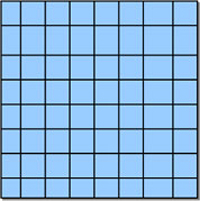 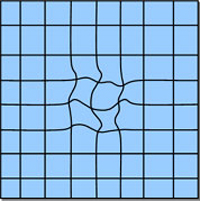 Visual perception of gridlines in a patient with macular degeneration

The term macular degeneration (MD) describes a group of diseases which result in breakdown of the macula, which is the central part of the retina in primates.

The symptoms of MD are highly variable from one patient to another and even in patients within the same family, where the very same DNA mutation is responsible for the disease. This clinical variability is characteristic not only for MD, but also for other retinal dystrophies. The most common symptoms of MD include blurring of vision, blind spots in the visual field, and distortion of the appearance of lines and shapes.

There are two forms of macular degeneration according to the age of onset: (1) early onset or juvenile MD, (2) age-related, late-onset MD. Genetic factors contribute to both groups but in a different manner. Juvenile or early-onset MDs can be caused by single gene mutations and the mode of inheritance is autosomal dominant (pattern dystrophies, Best and Sorsby disease), recessive (Stargardt disease), or X linked (retinoschisis).

Our research activities regarding the monogenic forms of MD include the identification of novel mutations in the respective genes (e.g. peripherin/RDS, ABCA4, RS1) to establish the diagnosis and to correlate genotype and phenotype.

The age-related forms (age-related macular degeneration or AMD) can affect one eye only, whereas vision of the fellow eye remains almost unaffected. There is an association or genetic predisposition for AMD. However, not a single genetic defect or mutation is responsible for the disease, as in early onset or juvenile MD, but rather multiple DNA variations in different genes are associated with AMD. We analyze established (CFH, CFB, VEGF) and novel genetic factors in the Swiss population in order to identify the high-risk gene variations and to correlate these with therapeutic outcome.