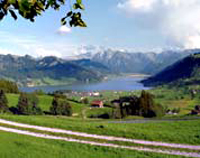 Lens transparency, a requirement of unobstructed vision, is achieved by ordered events of lens cell differentiation.  Disturbances during the developmental process of lens differentiation or impact of environmental factors can lead to a change in transparency and to the development of childhood or age-related cataract.  The majority of these defects are inherited dominantly but recessive patterns are also known.
Inherited cataracts can either be isolated, which is the most common type with a frequency at approximately two-thirds of all inherited cataract cases, or occur in association with other ocular developmental anomalies, such as microphthalmia, microcornea, and/or iris anomalies. Syndromic cataracts are reported in association with a number of diseases or chromosomal aberrations, such as Nance-Horan syndrome (NHS), oculofaciocardiodental (OFCD) yndrome, Lowe syndrome, or trisomy 21.

The overall prevalence of congenital and infantile cataract is reported to range from 1 to 15 per 10 000 live births, depending on socioeconomic status and ethnicity. At present, sequence variants in more than 100 genes are associated with congenital cataracts.
We studied 37 patients from 25 families. Pathogenic variants were detected in 20 families (80% detection rate), which included 13 novel variants in the following genes: BCOR, COL4A1, CRYBA2, CRYBB2, CRYGC, CRYGS, GJA3, MAF, NHS, and WFS1. Putative disease-causing variants were identified in 14 of 20 families (70%) as isolated cases and in 6 of 20 families (30%) with syndromic cases. A recessive variant in the CRYBB2 gene in a consanguineous family with 2 affected siblings showing a nuclear and sutural cataract was reported in contrast to previously published reports.